Sometime in late 2013, I decided to start writing again. Why is in an older blog post.  I began to follow a lot of writers on Twitter. Two of those were Cara McKenna and Del Dryden.  At the time, they were tweeting about re-watching episodes of BBC’s Robin Hood.  I was intrigued when they kept mentioning “GisPorn”.  Lucky for me, this was back when the series was on Netflix or Amazon Prime.

That I was instantly smitten was not a surprise.  Blue eyes do it for me every time.  I am also an 80s Hair Band Aficionado, having lived through that era in my teens and 20s. A gorgeous man with those eyes PLUS leather, a mullet and guy-liner.  Add in the voice/accent and I was LOST! So began my descent into The Armitage Army- what Richard’s fans call themselves.

I had to have more, so I next found MI5/Spooks. Season 1 Lucas was cute, but Season 2 was even better (don’t @me about Season 9.  It was a bad dream, not real).  During this I was still working on my Victorian manuscript. After getting around 40k words down, I was stuck.  Totally blocked.

Some helpful writers on Twitter suggested I try fanfiction.  Work on a quick, different idea and return to your WIP refreshed. Sounded great! Of course, that led me down a hole of reading fanfic! Wow!  Some of the best writing ever is out there!  But what a way to get feedback! I could load up unfinished, first draft pages without being embarrassed.

I chose Lucas.  I was relieved and overwhelmed by the kudos.  One reader in particular was encouraging and helpful.  It seemed I was finished in no time.  The reader and I finally connected by email and she stated she had a Lucas idea and thought about writing it.  I admitted that I wanted to turn the fanfic into a romantic suspense book.  We decided to help each other as critique partners and actually wrote our books together.  Mine became Broken Bits.

My partner and friend is Abby Vegas. Her book Clean Break was inspired by season 1 Lucas and is delicious and powerful. I am still in awe of her talent and by the fact she has actually met, touched and talked to our mutual crush more than once. Her blog posts are here: Detroit, Hobbit and Interview

Abby’s book came out in May 2016 and mine was set for October. Sometime that spring, we heard the rumors that RA might be cast in Love Love Love Off Broadway in NYC.  Abby knew other fans so we banded together and bought tickets- not even knowing if he was going to star! Crazy, huh?

Luckily, he was cast and we had front row center tickets. Unreal! This is my foot to show how close to the stage we were! See the chair in the pic below.

Abby used to live in NYC and had friends there, so we were able to have a place to stay. It was going to be a whirlwind trip- 3 days with the play, a musical and dinner with other fans. I was scared shitless- I had never traveled like that by myself (except for work), I had only been to NYC once and had never met Abby in person.  PLUS, Oh My God, I was going to be breathing the same air as RA.  Maybe even get a pic and an autograph.

It was amazing! Got the autograph, selfies and another fan uploaded some videos that show it! I am still in frequent contact with many of the people from dinner and the play. The 1st pic is from the dinner with our Guylty pins.  The 2nd is after I met him and my knees gave out.  The 3rd is Abby and I in our seats. Talk about shoving me out of my comfort zone! I am so thankful my husband and kids were all for this. This and publishing a book are the bravest things I have done. 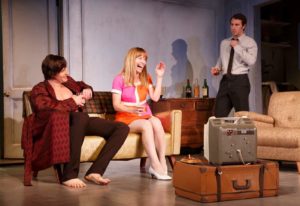 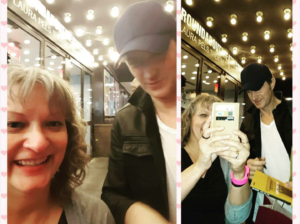 And I have met so many other fans since then. I have a group of online friends that I swoon with, but we mostly discuss our lives, our mental and physical health. I love them dearly!  Abby is still the best writing buddy/friend on earth.

So- that is why you see so much Richard Armitage on my facebook, twitter and tumblr accounts.  He is so much fun to swoon over and he seems like a very nice man in real life. While there are always the odd fans, the fanatics, I do treasure my Army buddies.

Oh- I just finished writing that Victorian book.  The hero- Dominic- looks very much like Guy of Gisborne.